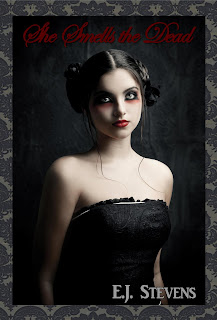 Title: She Smells the Dead

From the back of the book: It's the beginning of senior year and Yuki's psychic awareness of ghostly spirits is threatening to ruin her life. Her ability to sense spirits of the dead isn't glamorous like on TV. SHE SMELLS THE DEAD. Yuki is being visited in her dreams and suspects that her friend Calvin is involved in something strange. Will Yuki be able to save the spirits and herself?

Review: She smells the dead. When I read that my first thought was… who would have that as a title. Second thought was Ashley do I have to read it? And finally I just sucked it up and read the book. Actually I power read it, I was finished this and the sequel “Spirit Storm” in less then two days, normal it takes me weeks to read ebooks.

From the first paragraph I was hooked and pulled into the story. I was thinking about what would happen next when I was away from my computer. The characters felt like my best friends and at point I felt like I was a character, that’s always the best feeling I look for in a book and I got it!

The plot was paced very well and wasn’t overly dull, though there were a few times in the book that did drag a bit, that just let me get some relaxing done before the next big thing happened.

I would recommend this book to anybody looking for a great read and isn’t afraid to read a book that has a weird name and is different from the rest of books you find.

Rate: For the reasons I have stated above I give this book from 1, I couldn't finish it to 10, unputdownable, I rank this book a 10.